Towson Orthopaedic Associates is open for orthopaedic appointments in accordance with state guidelines.

While it is important to reassure you that we are taking all necessary precautions to ensure the safety of our patients, our medical providers and staff, we also know it is vital to take care of your orthopaedic needs.  Our offices in Towson, at the University of Maryland, St. Joseph Medical Center, BelAir and Rosedale are open, and each is continually sterilized and cleaned in keeping with CDC recommendations.

In preparation for your visit, we want to pass along our patient safety measures to ensure a smooth and efficient visit:

* Patients are required to wear a mask upon entering the building.

* Companions are only allowed when a patient is a minor, or if a patient needs medically-necessary assistance.

* All patients are asked to follow social distance safety markings including, sitting and or standing 6 feet from other patients.

For our patients who prefer a consultation in their home, we may also have telemedicine options.  Please call our offices at 410-337-7900 and we can discuss the right appointment for your orthopaedic needs.

AFTER HOURS IS CANCELLED UNTIL FURTHER NOTICE. 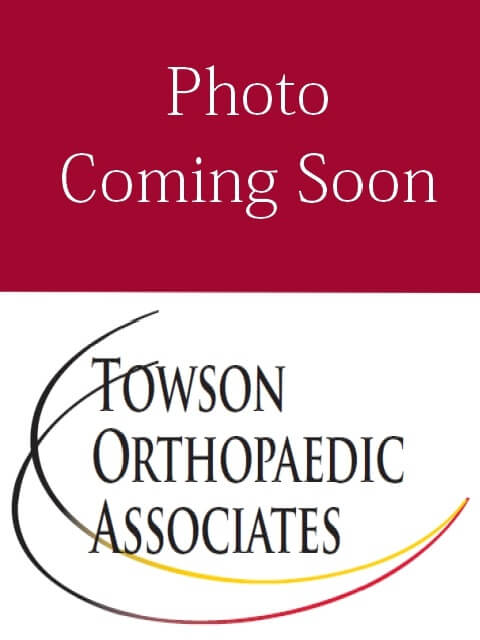 Robyn Zicker received her BS degree from Bob Jones University, Greenville, SC followed by graduation from the Essex PA Program, Baltimore, MD. She earned her MPAS from the University of Nebraska with a concentration in Orthopedics. Mrs. Zicker has been with the practice since 1998 specializing in lower extremity, foot and ankle, and general orthopedics. She first-assists in adult reconstruction, sports medicine, and foot and ankle surgeries.

ON-CALL STAFF — Beginning January 7, 2021, on-call staff will no longer prescribe narcotics after hours. Any patient requesting to have narcotics will be referred to the ER or told to call the office during normal business hours.

NO VISITOR POLICY — Only patients are permitted to attend their visit with their provider.
Exceptions are minors and patients needing medical assistance. This policy is in place to best protect the safety of our patients, staff, and visitors.